Located at the crossroads of three continents, Cyprus’ rich cuisines has seen a variety of influences over the past millennia. From Greece, Turkey, Armenia, Lebanon, Syria, Italy, France and the United Kingdom, the island’s local cuisine is Mediterranean. From hearty meat dishes and specialty cheeses to unique desserts of carob and grape it is no secret that the ‘Mediterranean diet’ is considered to be of the healthiest, thanks to its abundance of heart-healthy olive oil, pulses, lean meat, local herbs and freshly grown fruits and vegetables.

Add to this the favorable climate – that gives the fresh produce its intense flavor – and a celebration around every corner, complete with special treats, and you will find a big gastronomic adventure awaits on this tiny island! Coral Bay has something to satisfy everybody’s tastebuds, from traditional Cypriot Taverns, fine dining restaurants, Indian, Chinese, or simple fish & chips, there is a wealth of foods and restaurants to ensure everyone is happy.

More than a meze, Time to Visit a Traditional Cypriot Taverna

Taverns are a favorite food destination throughout the year. In the summer near the coast overlooking the Mediterranean Sea with a wonderful marine scent. They are also exceptionally beautiful in winter, with the fireplaces and wood stoves lit, and their interiors acquire a distinctive character. taverns in Coral Bay & Paphos offer delicious traditional meze and more, all inspired by Cypriot cuisine and an abundance of fresh local produce. The options to experience traditional Cypriot dishes and local cuisine are endless. 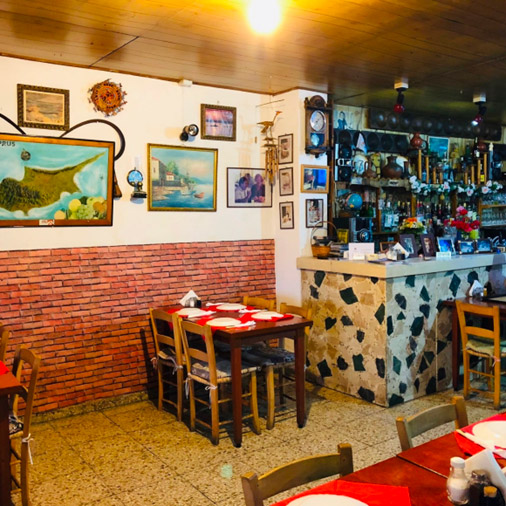 The sheer range of various culinary influences, and locally sourced ingredients that make Cypriot food amongst the freshest available make this Meze an experience. Meze is a culinary journey through appetizing little plates made with rich ingredients, warmth and happiness. A staple part of the “tavern” dining experience, meze is a treasured eating experience, complemented by a glass of liquor or locally produced wine. This truly unforgettable experience should be enjoyed slowly, or as the Greek Cypriots say, “Siga, Siga.” Synonymous with Cypriot cuisine is the ‘meze’ – a variety of small dishes that combine to create a feast, and a good starting point to become acquainted with the local dishes, such as moreish dips, braised, stewed and clay-cooked meats; local, freshly caught fish; pulses and legumes in various sauces; specialty cheeses and delicatessen cuts, and more unusual bites, all authentically prepared.

Halloumi is probably Cyprus’ most famous product, with its popularity extending to many countries throughout Europe and the Middle East. Distinguishable by its mild salty flavor and rubbery texture, the delicacy has become a favorite for chefs across the globe, appearing in dishes as diverse as lamb roast and halloumi fries. The cheese is produced by combining a mixture of goats and sheep milk, before being set with rennet. This is an unusual practice due to the absence of acid-producing bacteria in any part of the process, a standard for most dairy products. Halloumi’s high melting point means it can be easily fried or grilled, or served cold alongside freshly sliced watermelon, the perfect summer dinner.

The Cypriot variety of the dolma uses minced meat, rice, onions, tomatoes and a mixture of herbs. This filling is then carefully wrapped in fresh vine leaves. A village favorite, this dish can be found commonly throughout Greece, Turkey and the Middle East. Koupepia are usually made in large batches and can be frozen to be enjoyed at a later time – the dish is in every Cypriot grandmother’s menu. The stuffing of vegetables, called gemista, is a Cypriot tradition which extends beyond vine leaves, with peppers, tomatoes, onions, courgettes and even courgette flowers often being cooked in this manner.

A spin-off from the famous Greek dish, the Cypriot-style souvlaki consists of small chunks of charcoal-grilled meat on a skewer, and a large amount of fresh salad filling. It is an extremely popular meal, as many locals catch up over a pitta of souvlakia. The pitta bread used is thinner and larger than the Greek version, and usually contains a pocket to hold the ingredients, rather than wrapping the filling in the Greek way. The meat is commonly pork or chicken and can be accompanied by sheftalia. These are spiced sausage parcels with herbs, minced pork or lamb that are grilled. Alternatively, there are vegetarian options too, with mushroom and halloumi.

Similar in look to souvlaki but different in taste is souvla, comprising large chunks of meat slow cooked on a large skewer over a charcoal barbeque, called foukou in Greek. The meat is neck and shoulder of either pork, lamb, or chicken. This food is seen as the king of meat dishes in Cypriot cuisine, as it is quite common that a group of friends gather to cook souvla, while drinking beer, snacking and chatting as it takes a good hour or two. It is a popular meal eaten on Easter Sunday to celebrate the end of fasting and can be accompanied with a range of other dishes, usually potatoes and salads.

This dish often comes along with a dozen other mezze dishes, and consists of fried courgettes with scrambled eggs, sprinkled with salt. Most traditional eateries and restaurants serve this, and it is considered to be a very simple and typically Cypriot dish to accompany any other main.

Popularly known in Greece as pastitsio, the Cypriot version differs for its use of cheese, which is no other than halloumi, sprinkled with dry mint. Large pasta tubes, béchamel sauce and a tomato-y minced pork are the main ingredients used. Thin curls of cheese are often sprinkled on the top to give it a crispy crunch. The dish is usually prepared in a large oven pan. When served as a main dish, this Cypriot delicacy usually comes with a side of salad.

This dish comes with a fascinating back story. Kleftiko gets its name from the word “stolen”, as historically people would steal meat and bury it to be slow cooked in covered holes in the ground, so that no smoke would give away the location of the thieves. Today, it is cooked in traditional round, white ovens for many hours, flavored with bay leaves, oregano and red wine. The dish is accompanied by soft oven potatoes or bulgar wheat cooked in an onion and tomato sauce. Have it with a side of yoghurt to refresh each bite.

Another hearty meat dish that is a favorite in Cyprus is the moist stifado, prepared with onions and drenched in red wine. Beef is usually cooked alongside cinnamon sticks and cloves that give it a sweet kick. It is believed that the Venetians brought the recipe over and Cypriots added tomatoes in the 16th century when the fruit reached Europe. Stifado is cooked for several hours and is served with rice or bulgur (pilaf).

Originating from southeast Asia and Malaysia, this vegetable grows in Cyprus as the Colocasia Esculanta variety. Diners must tread carefully, however: eating it kolokasi in its raw form can be poisonous. Nonetheless, it is an immensely popular food across the island, especially during the winter as it’s a thick and substantial vegetable. Cut in small chunks, the vegetable is cooked in a tomato sauce with onions, herbs and chicken. Some like to replace chicken with pork.

A staple in every Cypriot kitchen, this simple and healthy dish mainly consists of black-eyed beans, and is served with boiled courgettes or Swiss chard, oil, salt and lemon. The beans are low in fat while being high in carbohydrates and protein. When growing they are extremely drought tolerant, meaning they can survive even in the extreme heat of the scorching Cyprus summers. Tuna, cucumber and tomato are often served as fresh and flavorful side plates with louvi. Many households have beans on Mondays and Tuesdays, a cultural and religious trait passed down through generations.

Koubes originate from the Levant region and are basically a torpedo-shaped croquette. The outer shell is made of bulgur and encases a filling of minced meat infused with middle eastern spices. These tasty bites are served with lemon wedges, with the zingy zest of the fruit really bringing out the filling flavor. Koubes can be purchased in bakeries throughout the island.

Loukoumades are made by deep frying dough balls, soaking them in honey and then coating them generously in crushed nuts, sesame seeds, cinnamon. Often referred to as honey doughnuts, these sweet treats have a light and spongy texture and are best enjoyed under the shade of a village tree in the heat of a balmy Cypriot summer. Available in specialty coffee shops throughout the country, the dessert is so delicious it has sparked great dispute as to where it actually originates from – Greece, Turkey and Egypt all adamantly lay claim to the dish.

Most lunch meals end with a glyko tou koutalou, which literally translates to “spoon sweets” due to the fact that they are the size of a teaspoon. These sweets are made from all kinds of fruit, vegetables and even nuts, which are boiled and then sugared to create the distinctive syrup they are stored in. Local favorites are the walnut, the watermelon and the cherry varieties, which are usually enjoyed with a Cypriot coffee and a glass of water.

You can find out more about which cookies we are using or switch them off in settings.

This website uses cookies so that we can provide you with the best user experience possible. Cookie information is stored in your browser and performs functions such as recognising you when you return to our website and helping our team to understand which sections of the website you find most interesting and useful.

Strictly Necessary Cookie should be enabled at all times so that we can save your preferences for cookie settings.

If you disable this cookie, we will not be able to save your preferences. This means that every time you visit this website you will need to enable or disable cookies again.

This website uses Google Analytics to collect anonymous information such as the number of visitors to the site, and the most popular pages.

Please enable Strictly Necessary Cookies first so that we can save your preferences!